Perfect-every-time Cinnamon Rolls for the win! ❤ 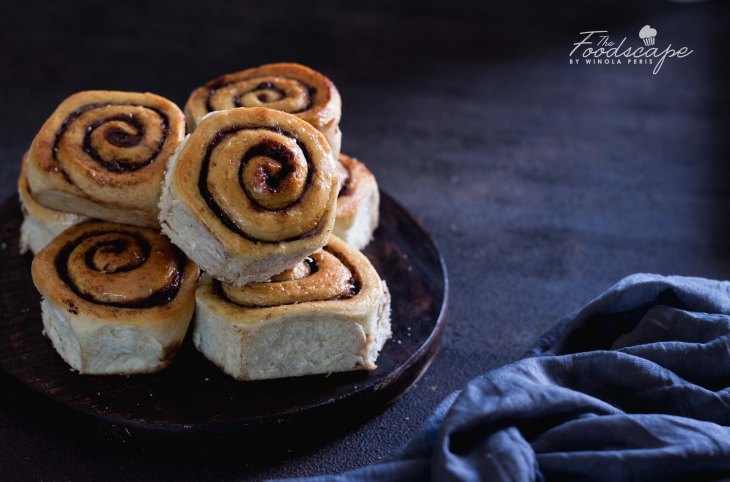 As the sun sets on my birthday in late September every year, I’m left with a wonderful feeling resting warmly on my chest… only 89 days to Christmas! This is me every year. When I wake up the morning after my birthday, I’m already in the holiday spirit. Prepping my Christmas cake order list, thinking about new recipes to attempt, planning blog content and just being overall excited for the holidays!

Over the last 2 years, an important part of my Christmas planning has been auditioning Cinnamon Roll recipes that I find online. I’m all about that picture-perfect Christmas morning, complete with presents under the tree, the comforting aroma of cinnamon wafting through the air, as the table is set with a breakfast of coffee, tea, pillowy cinnamon rolls and all the Christmas cookies. And some carols playing in the background, to boot! To that end, I was on the hunt for the perfect Cinnamon Roll recipe.

Sadly, the last two recipes I attempted were less than perfect. Tough, dry and chewy, the rolls were just blah. They were roundels of dense dough. Utterly disappointing. 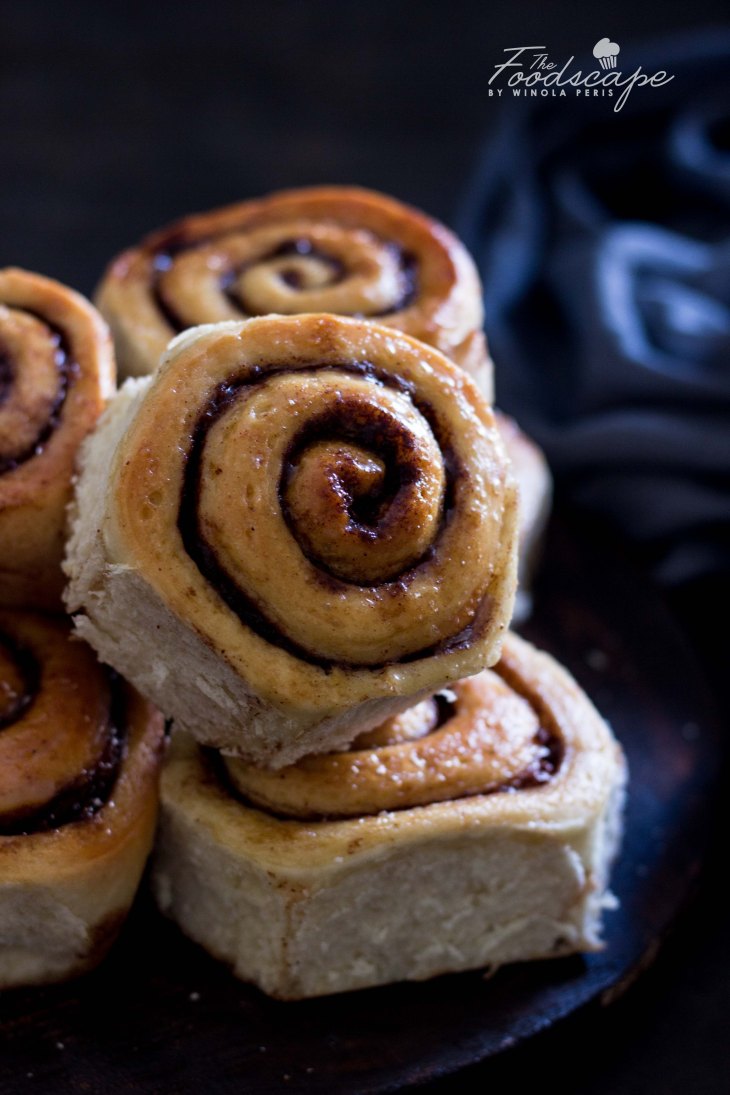 But not this one. This attempt turned out the most flawlessly fluffy, soft Cinnamon Rolls that are everything you want in a good roll. And that’s all thanks to Paula Deen’s infallible recipe.

Here’s what you need:

Here’s how you make these knockout Cinnamon Rolls: 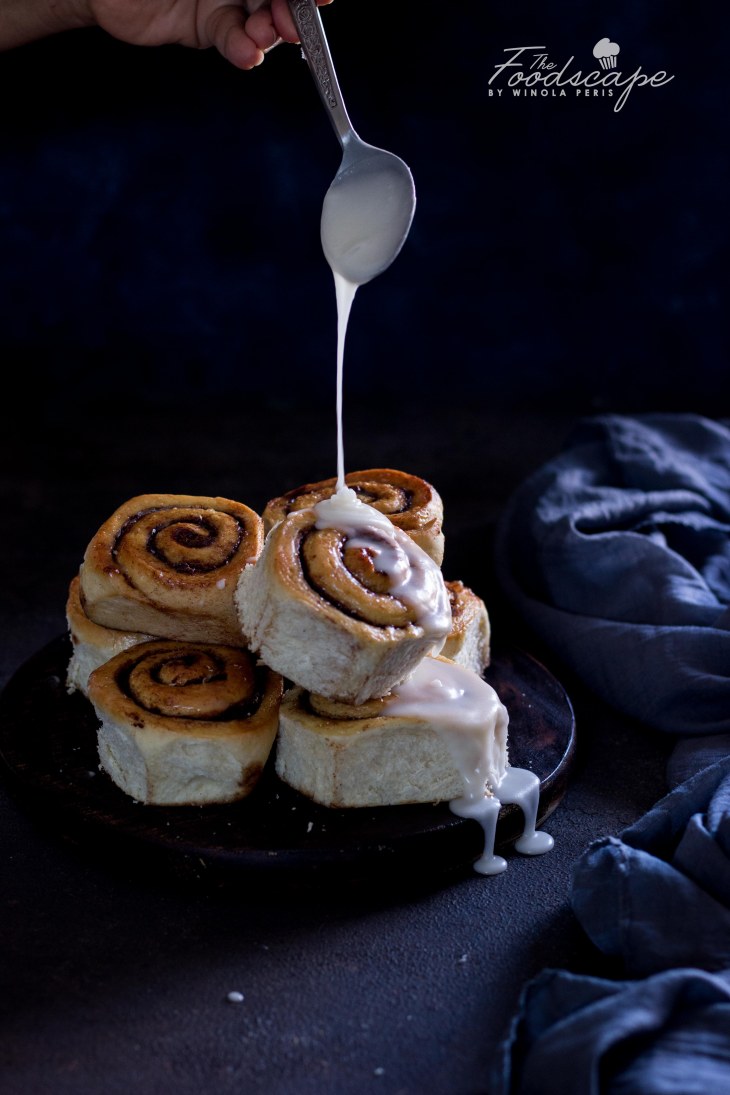 My first brush with cinnamon-anything was when my brother brought home a helping of Cinnaparts from Pizza Hut after a friend’s birthday party. Do you guys remember Cinnaparts? I remember loving every bite of the sugar-laden treat, and every time we went to Pizza Hut, I was sure to order it. Until one day I was informed that it was off the menu… forever! 😦

Years later, the cinnamon roll walked into my life when I visited the local Cinnabon for the first time. I was in love. From then on, every time I walked by Cinnabon, I’d stop and take in the sweet scent… then walk to Tim Hortons to get myself a Cinnamon Roll on the cheap-er! 😛 (Early 20s budgets, what can I say?) Also I don’t like the cream cheese frosting. There, I said it.

These Cinnamon Rolls, however, are better than Cinnaparts, Cinnabon and Tim Hortons, for a few reasons. First, they aren’t overly sweet, unless you slather on way too much glaze (which I won’t blame you for). Second, homemade baked goodies taste SO much better than store-bought stuff. Third, your home will smell like heaven all day; and you get bonus spritzes of Cinnamon Roll Scentsation ( 😉 ) every time you warm a bun up in the microwave oven. Fourth, well, you made them! Fifth, they smell like Christmas morning… umm, cozy!

These Cinnamon Rolls are soft, fluffy and cloud like. Squishy to the touch and super melt-in-the-mouth. The spongy bread roll is perfectly offset with the crackle of the sugar and cinnamon filling; just a subtle crunch to make these rolls your happy place!

The flavours are pretty classic – sweet, spiced, earthy notes in harmonious melody. For a richer flavour, I substituted brown sugar for white sugar in the filling; that with fragrant cinnamon and soft butter, and you’ve got a winner. Oh, and the vanilla glaze is so fresh and sweet. Together they make magic!

How to get these Cinnamon Rolls right every time?

So there you have it, a recipe for perfect-every-time Cinnamon Rolls that will make your mornings feel like Christmas morning; snug, homey and cheerful! Please drop by the comments to share any Christmas traditions you follow in your home, I’d love to read all about them. And if they involve Cinnamon Rolls, I’m giving you a virtual high-five! ❤

Until next week, I hope you enjoy this slice of Christmas time, a couple months too soon! ❤

Want to Pin This recipe for later? Here you go…

Psst… If you’d like to, you could come check me out on Pinterest! I pin a tonne of fun stuff – chocolate, lots of dessert, easy weeknight recipes; and home decor.

Also, for regular updates on what’s happening in The Foodscape kitchen, follow me on Instagram at @thefoodscape! You’ll love all the deliciousness there, I promise! ❤

Tell your friends about this:

Food blogger, photographer & stylist with big dreams in my head, passion in my heart and a lot of hustle in my bones! View all posts by Winola Peris

I'd love to know what you thought of this blog post! Cancel reply

This site uses Akismet to reduce spam. Learn how your comment data is processed.

When I'm not baking cake, I'm usually eating cake with a side of coffee and the beach!

I'm getting real #ontheblog today about fear and anxiety surrounding the pandemic and how the worry can be a massive weight sometimes. While I would love for the blog to always be a happy place, today I just couldn't muster up the joy I wish I could share with you. So I wallowed, and ate some Lemon Syrup Cake (adapted from @nigellalawson's recipe) and gave you the recipe instead, hoping it will be a slice of sunshine in these bleak times ❤️ I hope you are well and safe, much love to you❤️ Link to the recipe in my bio #TheFoodscape #LemonSyrupCake #nigellalawson #LemonCake #Citrus #lemon #cake #summer #food #foodstyling #foodphotography #hautecuisines #foodtalkindia #thefeedfeed #thebakefeed #saveurmag #goodfood #f52grams #muscat #oman #omanbloggers #muscatbloggers
#Eid is right around the corner and I'm feeling especially excited to savour some amazing sweet treats and biryaniiii! 😍 I have a small roundup #ontheblog of all the special desserts you can whip up for Eid. My favourites are these Orange Syrup Cakes, Rasmalai Tres Leches Cake, Phirni Tartlets and Rose Milk Cake! Hit the link in my bio to find all these recipes in one place 😊 #TheFoodscape #EidRecipes #eidsweets #fusiondessert #fusion #dessert #orange #saffron #rosemilkcake #rasmalai #phirni #rose #tarts #tresleches #food #sweet #foodphotography #foodstyling #muscat #oman #muscatbloggers #indianfoodbloggers
Happy World Baking Day, my lovelies! ❤️ What can I say about this hobby turned full-time love, except that it has opened my mind to endless possibilities, given me a chance to experience incredible flavours and taught me patience in spades. Here I'm sharing my #birthdaycake from 2019, a tall Ombre Rose Cake with a Rose Cream Cheese Frosting, a gift to myself amidst the hectic year. 😍 A big thank you to all who've supported my incessant desire to bake, have been my guinea pigs (hi mom, @leonardperis and @ak4sh_raj🙋🏽‍♀️) and have visited the blog, tried out my recipes and have shared their honest feedback! Thank you thank you thank you❤️ #TheFoodscape #WorldBakingDay #RoseCake #Cake #ombrecake #ombre #baking #foodphotography #foodstyling #hautecuisines #thefeedfeed #f52grams #beautifulcuisines #saveurmag #foodtalkindia #goodfood #sweet #thebakefeed #food #muscat #oman #omanbloggers #muscatbloggers
Four months ago I made this Flourless Chocolate Cake 🍰 for our amazing wedding photographer @slawawalczakphotography and it was a mighty hit! The fudgiest, most gooey and lipsmacking chocolatey cake ever! And it's #glutenfree too. Don't believe me? Swipe to see how ridiculously fudgy it is! 😍😍 Since, it has become a favourite, both in her home and ours. And now, you can make it too. Link to the recipe in my bio❤️ #TheFoodscape #FlourlessChocolateCake #glutenfreechocolatecake #glutenfreedessert #glutenfreecake #chocolatecake #cake #foodphotography #foodstyling #food #thefeedfeed #thekitchn #thebakefeed #beautifulcuisines #hautecuisines #f52grams #foodtalkindia #muscatbloggers #muscat #oman